Lego-based strategic planning is being used around the world to get 100% engagement in collaborative conversations that lead to insight and commitment from the entire team.  These modeling tools and planning process are being used successfully by the likes of Microsoft, NASA, Google, Kraft Foods and many others. You will be in good company.

Developing strategic plans and visions for the future with Lego is a much more effective process than ‘standard’ approaches. Which means it’s a fantastic 3-D model maker for organizations and individuals.  Lego is very useful for releasing creative potential, making conversations far more tangible, focused, and outcomes-based.  It’s also quite colourful, and just all-around fun. 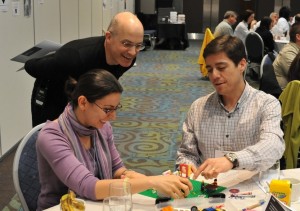 One of the strengths of Lego Serious Play is that it empowers all participants to engage equally in the design and problem-solving process.

Using a CT methodology proven over the past decade, combined with Lego Serious Play tools and methodologies, we can make your next strategic planning session one that you’ll remember — both for its usefulness and enjoyability.  Custom-designed sessions can be built for half a day to two days, depending on the outcomes you need to achieve. Outputs and outcomes are customized on a client-by-client basis, and often include:

In all of our events that incorporates Lego the laughter starts very quickly.  This is important — laughter fosters openness and trust; and laughter dispels fear.  Barriers start dropping far more quickly than when we use more traditional, talk-based engagements. With talk, it takes about three hours to get people to stop being political and polite and start addressing the underlying issues openly and usefully. When using our methodology and Lego, it takes about 45 minutes, more than three times faster.  When looking at the return on investment of hosting a small or large group event, it’s important to get to the core of the matter as quickly as possible. How large? How about 220 people? Think about that many Lego bricks rolling around lost on your carpet!

You can do that. And it will be highly effective. 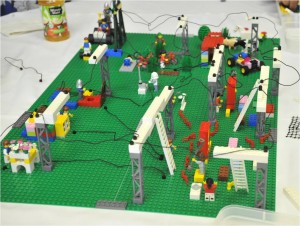 What may look at first glance like a child’s model is actually one of three alternate designs for an alternate Canadian healthcare delivery model for the year 2030. 25 leading thinkers from across Canada worked with us for three days to design and build new models for health service delivery that would be robust and financially affordable into the future.