Executive Dashboard-itis … or … “does that red light actually work???”

If you’re in any sort of a management role, you’ve seen them: executive dashboards, likely covered with three key colours: green, yellow and red.

Green, of course, means “project good” – or “please ignore me – I’m paddling as quickly as I can!”

Yellow means “project at risk” – or “this is a large IT implementation – you knew from the start that it was going to run over, so really, we aren’t even gonna try.” 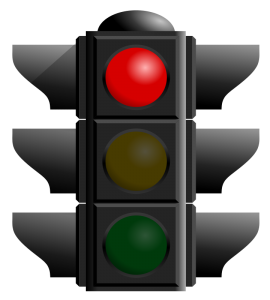 Red means what, actually? Because more and more senior executives that I run across REFUSE to see a red indicator on the dashboard screen. You can’t even SUBMIT a red indicator – she or he will be on the phone to you inside five minutes, telling you to submit a mitigation plan and a yellow indicator – because “we don’t HAVE red indicators here!”

More and more – environments where it isn’t even safe to admit that there’s a serious problem. And the leader of the pack, the big kahuna, is the one directing traffic, telling everyone on the team that there isn’t actually a colour red. There are those projects that are going along swimmingly, and those that are, well, going along almost swimmingly, except that they are large IT projects and there will likely be some modifications. But really, everything’s fine.

So, let’s back up. Why do executive dashboards exist in the first place? Are they a final report card? Are they what determines who gets bonused and who gets fired? Well, no doubt they are, some places, but they weren’t designed that way.

The point of a dashboard is a decision support tool, used to inform senior executives whose job it is to risk-manage all of the projects under them. And the point of having a dashboard is to bring it to meetings. Contrary to popular thought, meetings aren’t places where you bore people to tears with powerpoint decks – meetings are places that bright minds meet to puzzle over challenges, and to figure out optimal solutions.

If there are no reds, there are only yellows and greens, and there isn’t the ability to work collaboratively to trade off one thing against another, to assess resource requirements in various parts of the organization and to provide quick support to initiatives that need it. There’s just story-telling taking place, and it’s fiction, at that.

Does your organization’s executive dashboard have red lights? It should. And if the red lights aren’t working, chances are that someone you know hid all the bulbs!